Request a demo and free trial

Commsverse – a view from a newbie

Taking a small leaf out of a tabloid journalism playbook, my three word summary of Commsverse 2022 would be ‘Rooms, Compliance and Wellbeing’. If don’t read anything more than that, thanks for your time!

2022 was my first experience of Commsverse and it’s been a fascinating insight into the new world I am now working in. Strolling around the event, seeing everything on offer from the exhibitors, consistently threw up the three themes mentioned above.

Rooms was one of the first themes for me. Aside from the large presence of equipment suppliers, like our partners at Jabra and EPOS and Poly for example, the interesting element was the sudden need for improved rooms solutions within the Teams infrastructure. It makes perfect sense, following the rapid deployment and subsequent embedding of Teams during the pandemic, of course the need to expand this to meeting rooms would increase when the Teams enabled workforce started returning to the office. But companies are, understandably, wanting visibility on the uptake and usage of the rooms before committing to a large roll-out, so room reporting is a big deal as well.

On a similar line, Compliance was close to being a ‘buzzword’ for me at the show. As the dust settles on the Great Teams Rollout™, now the questions are being asked on the security procedures the now hybrid-empowered employees are using. Policies and procedures that were easily monitored and adhered to in the office, are they being followed within remote locations and in Teams itself? With more communications avenues open, the chances of breaches also increase. So how can companies monitor and check the way that employees are using teams?

Last, but by no means least, Wellbeing. A topic that has had many more insightful and knowledgeable articles written about it (like this one from Forbes), but one that every single one of us can impact or is impacted by on a day-to-day basis. I heard a great story from a visitor to our stand during to the show about a colleague who was concerned about a fellow worker not joining in with team lunches now they were back in the office. Were they OK? Are they unhappy back in the office? Are they overwhelmed with their workload? Turns out in this instance, they were actually fasting during the day, so no harm done, but for me, the face-to-face interaction between workers raised this issue which is a great thing, but can the data coming out of Teams help to add some meat to these bones?

Put simply, yes, it can and I’ll touch on this in a little more detail in a future blog.

But for the time being, this show highlighted that while the world is starting to return to some form of office life, the impact the unified communication deployment has had is spreading much further. The three themes picked out here all stem from the gradual reopening of the office world and all could or do have significant impacts on businesses around the world.

If any of this resonates with you, please do get in touch, as our Clobba suite can help empower you with the data you need to keep your workforce aligned, secure and happy.

Oh, as a final note from Commsverse. The Stig might be able to use a gear stick, but his putting stick skills are awful. 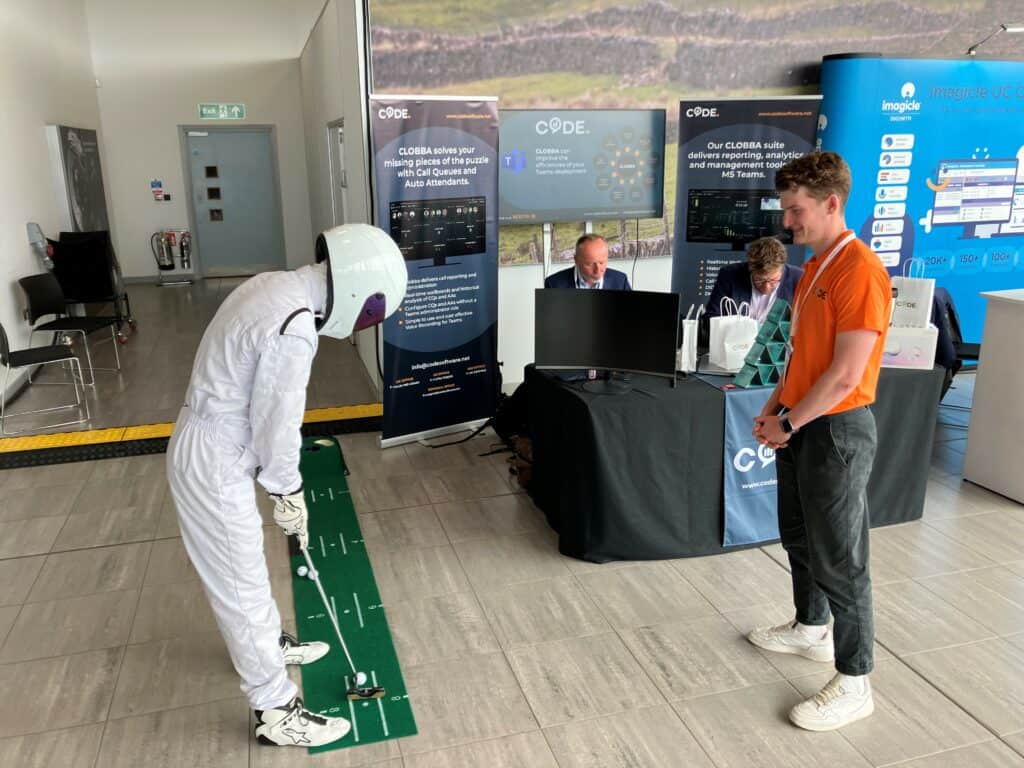 Request a demo & free trial
We use cookies on our website to give you the most relevant experience by remembering your preferences and repeat visits. By clicking “Accept All”, you consent to the use of ALL the cookies. However, you may visit "Cookie Settings" to provide a controlled consent.
Cookie SettingsAccept All
Manage consent

This website uses cookies to improve your experience while you navigate through the website. Out of these, the cookies that are categorized as necessary are stored on your browser as they are essential for the working of basic functionalities of the website. We also use third-party cookies that help us analyze and understand how you use this website. These cookies will be stored in your browser only with your consent. You also have the option to opt-out of these cookies. But opting out of some of these cookies may affect your browsing experience.
Necessary Always Enabled
Necessary cookies are absolutely essential for the website to function properly. This category only includes cookies that ensures basic functionalities and security features of the website. These cookies do not store any personal information.
Non-necessary
Any cookies that may not be particularly necessary for the website to function and is used specifically to collect user personal data via analytics, ads, other embedded contents are termed as non-necessary cookies. It is mandatory to procure user consent prior to running these cookies on your website.
SAVE & ACCEPT
Free Quote
Free 30-day Trial
Free Demo